Add description and links to your promotion Moss ledges are a great way to propagate your moss, while adding surface area to your aquarium. Just trim up your moss, and tie it to the ledge...it's that easy!! The quality of these ledges are 2nd to none, and are strong and clean looking. We even tested suction cups, so that we could provide the best suction for the ledges as possible (I hated having crappy suction cups that would let go and let my moss drop down to the substrate). These ledges will not turn, fall, droop, or break while tying (something I was having issues with buying from other vendors).

Ledges with moss growing are also a great way to feed your shrimp, if your snails like to take over when you feed on the ground. I noticed with my snails, they don't climb the walls to get to the food if you feed on a moss ledge, so the shrimp have full reign of the food.

Sometimes buying from aquatic stores online can be like shooting in the dark, but you can shop here in confidence. I purchased 10 of the moss ledges --- they were shipped within 24 hours and in my hands in only 3 days from the purchase.

The ledges are quality, and I particularly enjoy the design along the outside, which served as a guide for my fishing string. The holes are also big enough to slip some smaller varieties of crypts and buce in without needing to secure them down (even in my tanks with high flow).

My neocardinias wasted no time getting comfortable on these. Within 10 minutes, I had three velvet blues on the underside of one ledge.

I am thrilled with the price, shipping time, and quality, and will absolutely be back when I need more.

I wish I bought more of these. I used zip ties to hold the susswassertang to it and it fits nicely!

My Blue Bolt tank is a Waterbox Cube, which has 10 gallons of water volume but not a lot of horizontal floor space for plants. I bought 2 square ledges and 2 half moon ledges to give me vertical space to work with for some plants. I've got moss tied to 2 of the ledges, and anubias nana petite on the other two. The shrimp love them and they added a cool bit of verticality into my tank. The teeth work great for running thread through. Highly recommended.

I've tried ledges from another source or two, these are definitely my favorite. They're a lil thicker and the notches making tying them up a breeze.

Perfect for my purposes! Will definitely buy more!

These little ledges are perfect for a betta bed near the surface with some moss attached he is snug as a bug!

Exactly as described and they threw in an extra one plus a piece of candy! Came super fast and look great in the tank!

Just what I needed to grow small amounts of moss close to the top of the tank. Easily can make a Betta bed with moss or ferns on it. VERY FAST shipping! I will certainly buy more in the near future.

Forgive me, purists, for I have sinned! The pink Moss Ledge I bought is holding -- gasp! -- a Narrow-Leaf Java Fern. Of course, being completely overqualified for the job, it is doing it quite well. As you might imagine, given that it's designed to hold lots of teeny-tiny things together, the ledge has more than enough tie-down spots and thread-catching notches; so, attaching the fern's rhizome was uber-easy. Once that was accomplished, and the ledge was introduced into the aquarium, the suction cup held the combination securely in place. Then, when I saw that leaves were scraping the surface, the super suction cup was simply slid down to a new spot, deeper in the tank, all the while never detaching itself from the glass, where it again held firm ... Until, after much consideration, I decided that it wasn't exactly level. That pink really shows up in a green tank! A slight twist rectified the situation. And, once again, the suction cup never let go.

I purchased a couple of these and I’ve used around half! I added some moss and buce(plant) and are doing well! Nice looking ledges, definitely a deal! 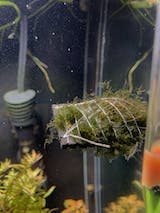